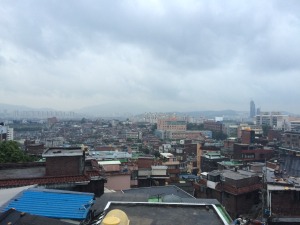 Today started a bit slower than usual. After my massive walk yesterday and spending 4 hours in a museum I slept in until 9ish and rolled out of bed onto my laptop and considered staying at home today. I still had a bunch of tabs open from yesterday with a variety of sights to see around Seoul. I flicked through them in between reddit and emails and began to feel guilty about staying in.

During my flicking I saw I’Park electronics mall. Essentially it’s a shopping mall with a bunch of electronics products. It’s not too far from Itaewon and is on top of Yongsan station, where I caught the train to Jeonju on my first day. I arrived around 1 and looked at the place and tried to find an entrance. I entered a few different department stores selling western brands for western prices. I didn’t purchase anything and don’t really see myself buying anything. I brought enough gear with me to Korea and anything I’d need for home may as well be bought at home because the prices here are pretty much on par.

I considered catching the train to Jung-gu and checking out the malls over there but I think I’d have the same problem of not really wanting or needing to buy anything and just going for the sake of it only to turn around an hour later. I walked around I’Park for a while and began checking the upper levels. There’s a lot of different restaurants so I’m writing this from a noodle bar after eating Sichuan noodle soup. The soup had a pretty good flavor overall but wasn’t as spicy as I was expecting it to be.

I’m not sure what my afternoon will consist of but I’m sure I’ll find out. It might just be an afternoon of bumming around home. I think tomorrow I might go to a palace, ancient tombs, an art gallery or something else. I’m not sure yet. I think after spending time in China, Thailand and Jeonju I’m just a bit over seeing the palaces and temples. They all have very similar layout, architecture and history. I think the ancient tombs will be a good option or checking out some of the national parks around Seoul. Namsan park is close and looks interesting.

The 4th of October is my last night in Seoul and the grand final of the GSL Starcraft competition. I’m looking forward to that and think I’ll spend the 4th exploring Gangnam.

Note: written a few hours after part one

I decided to walk to Namsan park today. I got rained on, hard. I left I’Park and enjoyed a nice walk through Seoul with a bit of drizzle coming down but not enough that I needed my umbrella the whole time. The whole trek to Namsan park was pretty hilly and not for those with weak legs although I did see what appeared to be a 90-year-old woman making the journey. After I took a wrong turn I eventually made it to the top and got some photos and was promptly rewarded with enough rain to remove all my travel stink.

It rained a lot and I had to find my way back down the mountain and through narrow side streets with a dying phone. I made it and was soaked but luckily had the hostel room to myself so got a delicious shower. I’m at a Korean Muslim restaurant now and just had some pretty tasty food before heading home for sleep.