Last night I was lying in bed on my phone and must have just fallen asleep. I woke up and the room was entirely black. My room at home is anything but entirely black for sleeping. I definitely enjoyed the darker environment and will have to try it out at home. I’m looking forward to showering, I haven’t been able to shower or brush my teeth yet. My toothpaste I brought from home was empty and I forgot to bring a towel. I was able to find a guy selling fabrics and now have a towel, life is getting better! 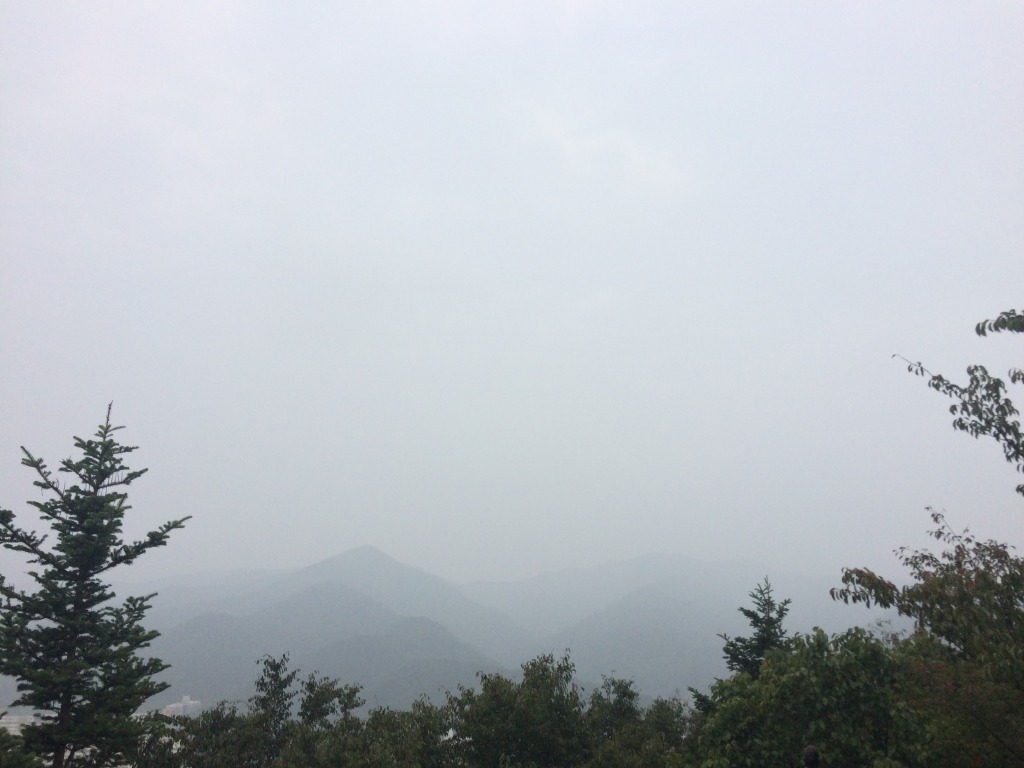 I’m sitting on top of a mountain in a tower. I can see all of Jeonju and into the other mountains. This area is called Omokdae, here is a bit of text from the Korean tourism board about the area: Omokdae is located on top of a steep hill and is one of the places where Yi Seong-gye (who later became King Taejo, the first king of the Joseon Dynasty) stopped to celebrate his victory on his way home from a war with Japanese invaders at Hwangsan Mt, Unbong at the end of the Goryeo Era. It is also a place where Mokjo, one of Yi’s forefathers, had once lived.“

There was also a farmers rebellion on this mountain. The farmers were able to make their way towards and into the castle without spilling any blood. Once they got there the government army attacked from the outskirts of the town and a very bloody battle began. 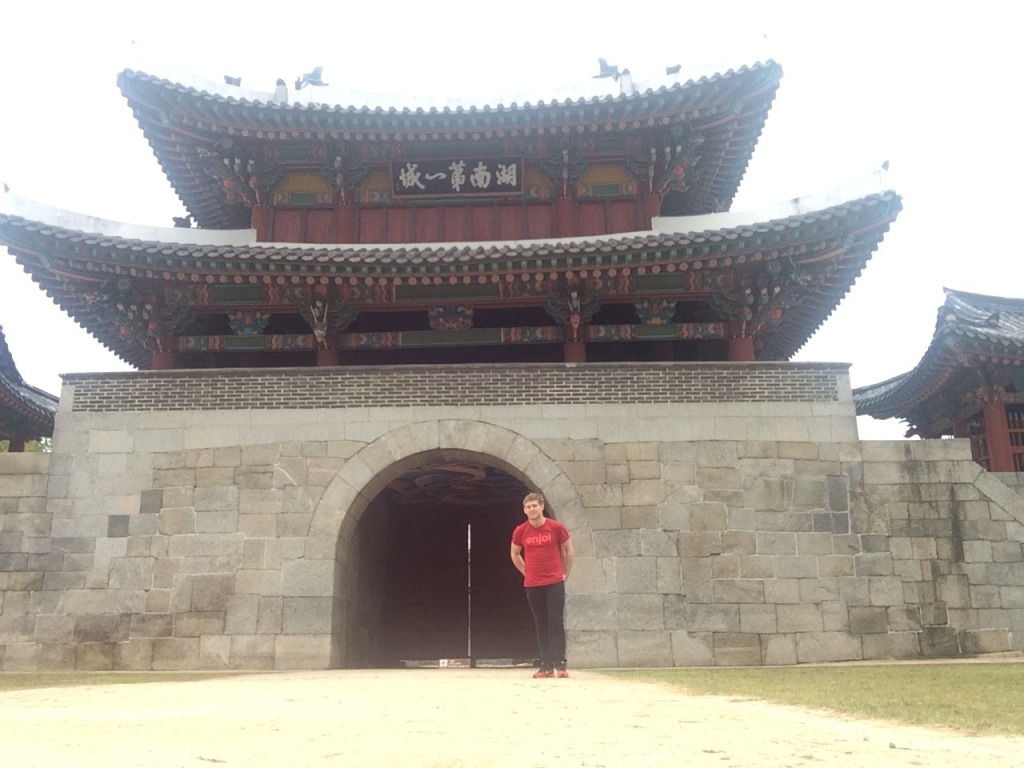 I followed the main path down the mountain but saw a narrow side path that looked interesting. I followed it along and ended up on a pretty sketchy feeling and looking set of wooden stairs. As I continued down the path there was increasingly less signs of other people until I ended up in a small farm.

Right now I’m sitting on a bench in front of some play/gym equipment. My umbrella handle broke but is still functional, there’s a bit of rain and I am very glad I wore good shoes. 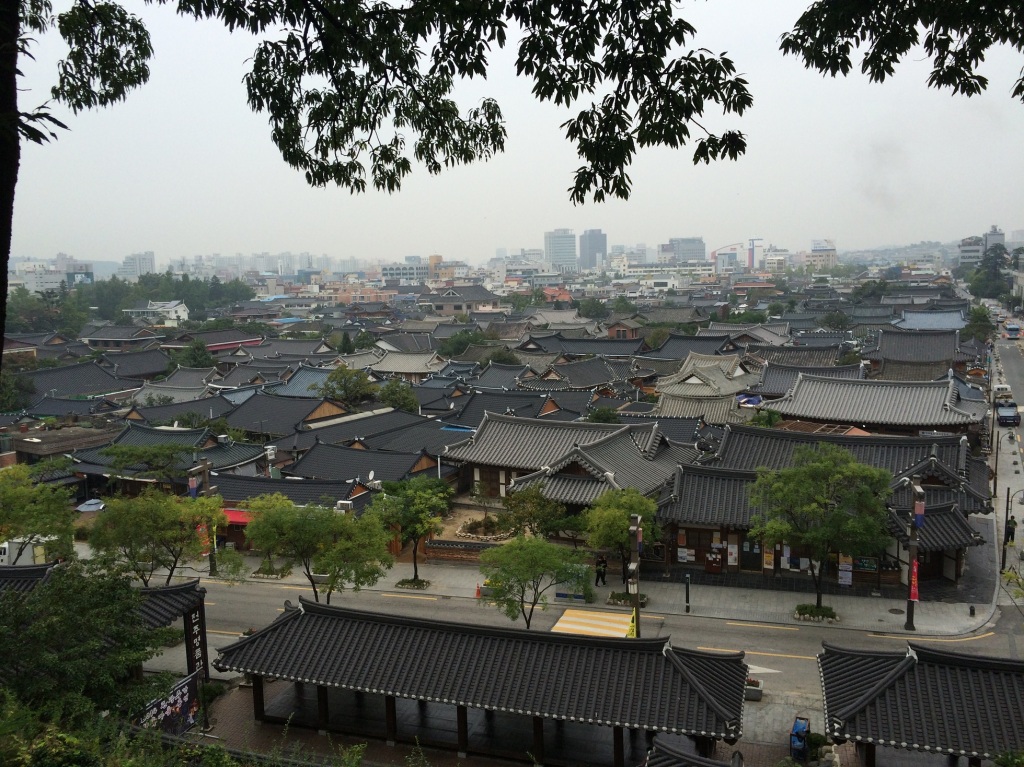 I’ve walked very far since I last took a note. I walked from the bottom of the previous mountain through the suburbs of Jeonju. I continued walking until I found the Korean Institute of Intangible Culture. I’m not quite sure what intangible culture is but they were setting up posters for a film festival, everything was in Korean and the people in the area only spoke Korean so I was unsure what was happening there.

After the KIIC I kept walking for another 10 or so minutes before I found an enormous mountain staring me in the face, too tempting. This is a place called Martyr’s Mountain. In the 18th century Christianity was made illegal. A man and his six relatives continued to preach in Jeonju and the king had them executed. Afterwards a French priest came to the area and the locals as well as this priest organized to have the remains moved to the top of this mountain so whenever Christians needed strength they were able to look towards Martyr’s Mountain. 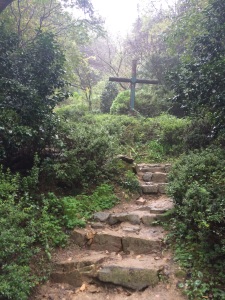 This thing is big. Real big. It’s about 2km from the bottom to the top and all of it is stairs. Once I began walking up the path and realized the gradient as well as the distance involved I had a tiny bit of regret but as I’m sure most people understand once you start something like this it only makes sense to keep walking. I hadn’t eaten anything yet and it was nearing 3pm. I had a lot of hunger and fatigue but it was alright. I kept walking and eventually I saw a large granite church signaling the top of the hill. The views were nothing short of amazing and being the only person on this mountain surrounded by fog it was a very memorable experience.

I walked down the mountain and lucky for me the road I was on took me past a Buddhist monastery directly back to the hostel.

I made it back to the hostel and enjoyed the fastest internet in the world before heading out for dinner. As I had with China I had some great experiences walking into places where nobody spoke the same language and I couldn’t get served via image or text. I ended up finding a place where I am writing this. The extent of the ordering was a Korean man asking “chick?” And after I said yes he came back a bit later with a plate of some sort of chicken as well as some side dishes. 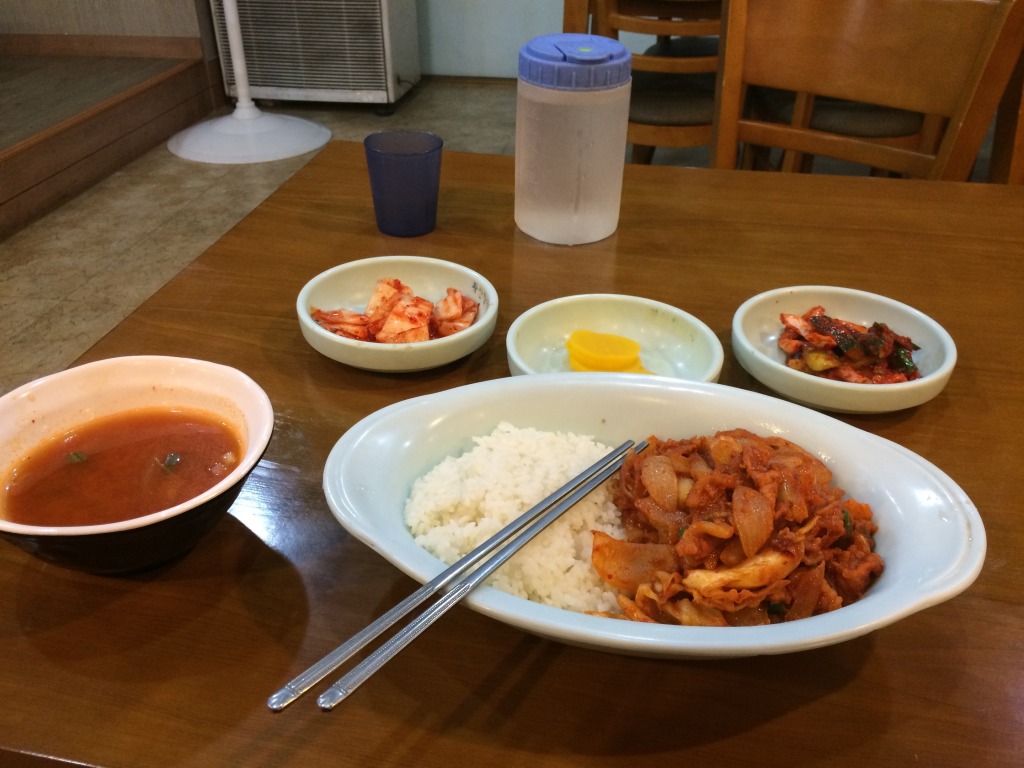 It’s been a good meal so far and a good way to end a good day. Tomorrow I have to get up and catch the express bus to Seoul. I’m expecting it to take 2-3 hours. I could catch the train but bus appears to be faster if it’s express.